While the National Gallery was temporarily closed due to COVID-19, an ambitious and unprecedented conservation project began behind the scenes on one of the most prominent works in the collection.

It is mid-Autumn in Canberra and the National Gallery is eerily quiet. Like most public institutions across the country, the doors have been temporarily closed for several weeks due to COVID-19.

Inside the building, the bustle of visitors and colour of creativity has been replaced by an unusual stillness. And there is darkness on the walls: the empty galleries are adorned with works draped in custom-made, individually labelled black covers protecting the art while not on display to visitors. This is not a Christo-style installation; this is art in the time of Coronavirus.

Upstairs the international galleries on level 2 feel oddly cavernous. Where usually your eyes can feast on Andy Warhol’s Elvis 1963, David Hockney’s A Bigger Grand Canyon 1998 or Constantin Brancusi’s Birds
in space 1931-1936, most of the collection is now hibernating.

At one end of the Abstract Expressionist gallery, Senior Conservator of Paintings David Wise is standing in front of the largest black cover, protecting one of the most iconic works in the collection: Jackson Pollock’s Blue poles 1952. He gently lifts a corner of the parsilk covering and takes it off. As each portion of the canvas is revealed, it is as if Blue poles has awakened, the vibrant hues popping as they hit the light. 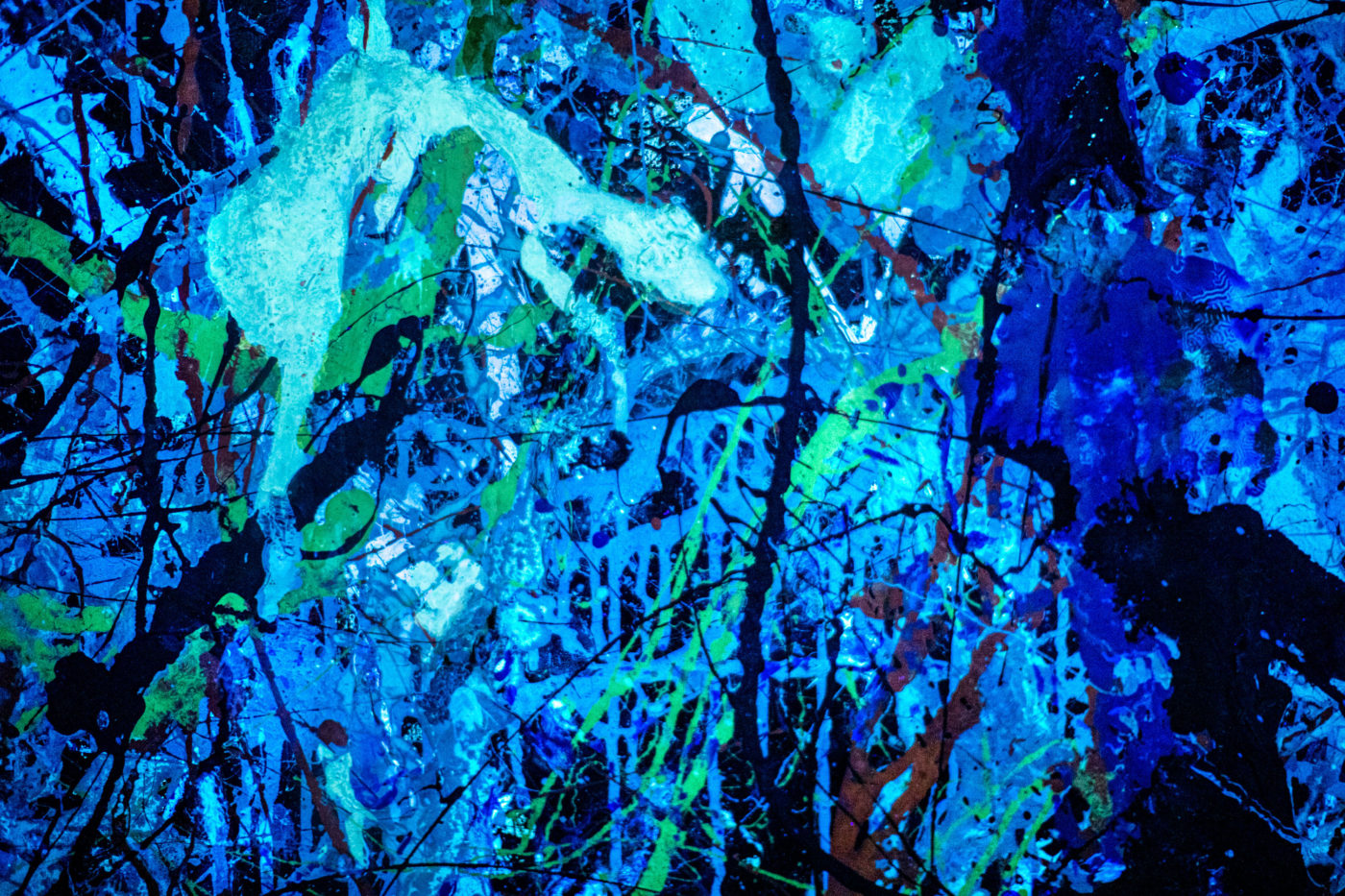 Detail of Blue poles as seen through UV lights

David focuses a microscope and begins looking intently at a minute intersection of colours on the canvas, the larger detail illuminated on the attached screen. To the right is a step ladder and to the left is a table scattered with other conservation tools: brushes, a torch, a large transparency taken of the work in 1962.

This is the beginning of the first in-depth research, analysis and major conservation treatment of Blue poles since it was bought by the National Gallery in 1973. For a number of weeks while the Gallery remains closed to the public, David will study and analyse one of Australia’s most famous works in situ. It is an ambitious project, a long time in the planning and now being realised in part because of the unprecedented closure.

“My predecessors have, of course, examined the work but our time with it has, by necessity, always been limited because it’s constantly on display – it’s an iconic work that visitors always want to see,” explains David. “But now we have the opportunity when there’s no visitors for an extended period to really get to grips with the surface and look at this painting in depth using all of the tools available to us. We’re hoping, through this analysis and research, to find out exactly what is going on with this painting as it moves towards its 70th birthday (in 2022). There has been conservation work carried out in the past and there have been some questions asked and answered but never with this breadth. We’ve never had this opportunity to work with this painting for weeks on end. It’s a fantastic opportunity.”

A few minutes later National Gallery Director Nick Mitzevich visits Blue poles to witness the start of this historic project. While the majority of staff are working from home, the Director prefers to continue running the institution from his office (while continuing to abide by social distancing): “I feel more connected here,” he says.

Nick confers with David, the pair taking a quiet moment with Blue poles. David points a torch at the canvas and the Director and the conservator discuss Pollock’s use of household paint. Both men have seen this canvas many times before, but this is a chance to see it in a new light.

Nick recalls that he was 18 and a university student “with a copy of Robert Hughes’ The Shock of the New tucked under my arm” when he encountered Blue poles for the first time in real life.

“This is a painting that has transfixed a nation. And during our closure it’s the first time we can spend a rigorous amount of time exploring the materiality, conserving and cleaning the work. It is the most significant conservation project that’s ever been mounted on Jackson Pollock’s Blue poles and I hope people come on the journey to explore this work of art.”

Microscopes and infrared lights have been used for analysis 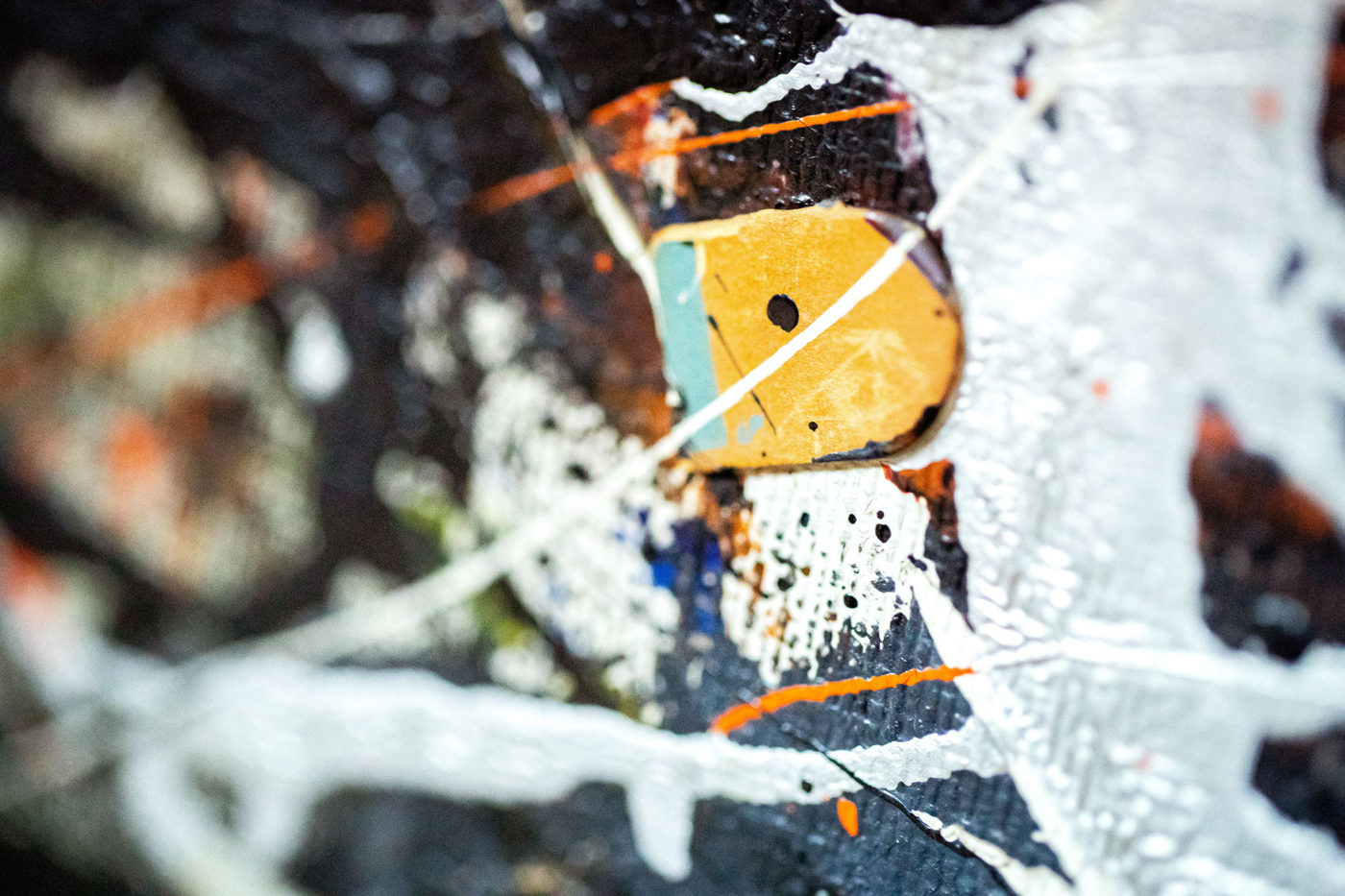 Pieces of glass, cardboard and even Pollock’s thumbprint are embedded in the work

Blue poles – the last of Pollock’s monumental abstract paintings – is deeply ingrained in the DNA of the National Gallery. Its purchase from New York art dealer Ben Heller by founding Director James Mollison in 1973, nine years before the gallery opened its doors, caused a sensation. The price – A$1.3 million, then equal to US$2million – was a record for the artist at the time. The acquisition needed the approval of then Prime Minister Gough Whitlam who famously declared: “Buy it and disclose the price”. The fact that it was a large abstract work by an American artist also contributed to the heated public discourse.

“It was a big deal, the National Gallery had not opened and people had very little sense of how the building and the collection would be,” says Senior Curator Lucina Ward. “So, the whole idea that a large work, an abstract work, a work by an American artist should become such a key early purchase in the collection, was really quite shocking.”

Blue poles has gone on to become one of the most significant paintings in the twentieth century and part of the fabric of Australia’s cultural history. It remains one of the most popular works in the National Collection, a cultural pilgrimage destination of its very own. The public appetite for Blue poles means it is rarely off display. It has been lent only a handful of times over the past four decades: it toured Australia in 1974; to the Museum of Modern Art, New York, and the Tate in London in 1998-99, to Melbourne’s NGV in 2003, part of the Gallery’s 20th anniversary celebrations, and for the Abstract Expressionism show at the Royal Academy of Arts, London, in 2016.

Blue poles is one of two Pollock paintings in the national collection, the other being Totem lesson 2 1945. Pollock was inspired by the work of indigenous American artists, especially Navajo sand painting, and ideas about the subconscious: what art can be for people across all time and all places. Pollock had come to New York from the mid-west, adopted his cowboy persona, “the bravura of an outsider, and challenged both the art world, and what painting can do” says Lucina. With Willem de Kooning, and alongside the other painters known as the New York School who worked and drank together in the 1940s and 50s, Pollock is known as “a founding member of Abstract Expressionism”.

“When Pollock first started Blue poles he was in a down patch, but he was soon brought out of that and started working with extreme energy on this extraordinarily large canvas,” says Lucina. “It’s important to remember that he was not using traditional art materials but house paints – synthetics and enamels – because they are more liquid. He could work up the layers, achieve extraordinary movement and used the paint to capture gesture.

“And that’s part of what’s so incredibly important about Pollock’s work, about Abstract Expressionism and about Blue poles: it’s that layering, that working, that manoeuvring of the paint, and we can see it in the paint surface of Blue poles just how far he pushed both his medium and the idea of painting.”

Pollock’s use of household paint – which ages differently to traditional artists’ paints – and his famous dripping technique will form the basis of this project. Surface microscopes, ultraviolet and infra-red lights, and X-Ray will be used to examine the painting to determine and identify possible treatment. More in-depth analytical techniques will also be used to look at how the paint has been applied, how it has aged and any surface changes that have occurred since it was painted.

David first came to the NGA in 1990, shortly after arriving in Australia, and recalls seeing Blue poles for the first time as “breathtaking”. This project also brings full circle a two-decade personal connection to the painting for the conservator, who was involved in the preparations ahead of its tour to the Tate in 1999.

“My work now is a continuation of that,” recalls David. “At the time we carried out a small amount of analysis, looking at the paint layers, but it was only limited in scope because we didn’t have much time with it.

“So I’m really thrilled to be able to follow this up 20 years later and now take that work further, to be here working with Blue poles is such a joy.”

The cultural significance of this work and subsequent pressure of this project is not lost on the conservator.

“It’s an extremely important painting, so to actually be responsible for looking at it and treating it, there is naturally some pressure,” he acknowledges. “But as part of my job, through training and long experience working with paintings, you concentrate on the job at hand, concentrate on the painting as a work of art, and apply yourself to the task and the issues that are raised by the work itself. You try to divorce yourself from those external pressures, even though they are there.

“The National Gallery collection is full of fantastic works, we deal with marvellous works every day – for example I had the pleasure of cleaning Monet’s Haystacks, midday 1890, before it went on loan recently. But every painting is a challenge; we treat every work with respect and each gets our full attention.

“This one however is on a different scale because of the social pressures and the cultural significance, but ultimately it’s just a pleasure to actually deal with a work like this, to actually have the privilege to work so closely with such a painting is fantastic.”

The end result of this conservation project remains unknown. For Lucina, this has been a fortuitous moment to take a deep look at one of the most prominent works in the national collection in the lead up to the 70th birthday of Blue poles in 2022.

She says: “We have this opportunity now – turning a negative into a positive – to examine this canvas in detail, to learn more about how Pollock made the painting and indeed why the work is so important. We want to ensure Blue poles stays vibrant, powerful and passionate for another 70 years.” 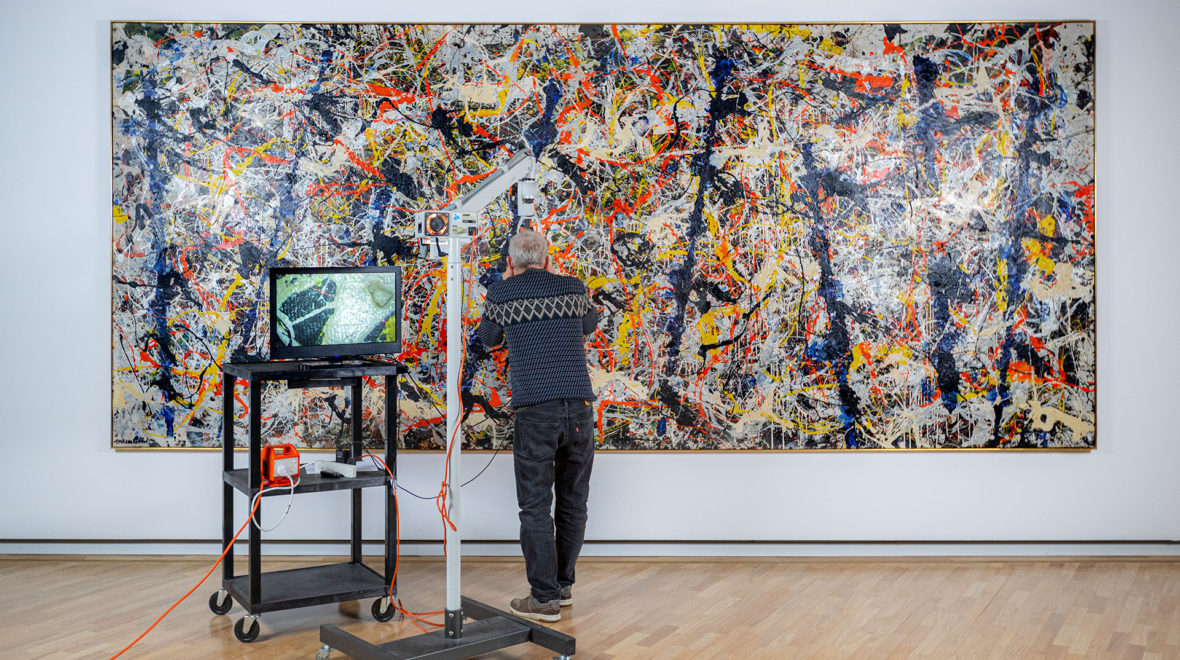