Jackson Pollock’s Blue poles has moved to the lower ground floor, the first time it has changed location since 2017. So what does that mean for the Blue poles conservation project? Senior Conservator David Wise has been treating Blue poles in situ since the Gallery temporarily closed during the COVID lockdown in March last year. Here, he reflects on the past 12 months of working on one of the most iconic paintings in the national collection, the public interaction with his live treatment sessions since we reopened and what happens next

Sophie Tedmanson: So what has the past 12 months been like working on Blue poles in situ, both while the Gallery was closed and when we reopened to the public?

David Wise: It has been interesting, and it has been good to be able to continue it, because what we didn’t know at that time of the lockdown was how long we were going to have. People have been coming in and chatting quite regularly; people are interested in what we are doing.

Sophie: Will you continue working on it in the new space?

David: Yes, there’s a commitment now to continue the treatment and it’s going to be interesting because the space is quite different – it’s a much more intimate space, in some ways, so it’ll be a benefit to the public as they’ll be closer to the painting. Over the past 12 months we’ve had a lot of people coming in and chatting to me quite regularly about the project, so people are interested.

David:              There’s a similar range of questions: why are we doing this? What are we doing exactly? People share their memories of the work. A lot of people remember quite clearly the impact the first time they saw Blue poles or when it was acquired and travelled around the country [Blue poles was acquired in 1973 and went on a national tour in 1974, before the National Gallery opened in 1982]. It has been interesting hearing people’s stories and feedback, because it gives you a sense of what an impact it did have – it was a big cultural event. So that has been one of the pleasures of this project, just talking to people and hearing their reactions to it. And also, of course, the younger generations for whom this work is a different thing entirely because they’re taught about it in school, so it has that iconic status. So it’s like studying a living piece of history. It’s also a painting that elicits a response; it is a series of brushstrokes and colours and surfaces, and people respond to it in various ways – some are just completely overwhelmed by the impact it has on the human being – it’s not what they expect.

Sophie:            That’s such a great reflection of the power of art. So talk us through what you’ve done over the past 12 months and anything interesting you’ve come across.

David:              Well, when we first started we didn’t really know what we were going to encounter, because the information we had was limited in some ways. We knew a little bit of the history of the work, but as we’ve looked at the painting and done this treatment, we’ve got more information about what has happened over time and, most importantly, before it came here. We can see what has happened with the work previously, where there has been a couple of treatments to the work done before it came to Australia.

So we’ve seen what differences that has made to the surface and what differences that has made to the treatment we’ve been able to do. But, essentially, it’s in remarkably good condition for its age. It is still surviving incredibly well considering it turns 70 next year. And the other thing was the fact that this has been a unique opportunity to deal with modern materials and this transition period in the 1950s when artists were moving away from the oil-based paints to more modern paints. We can’t take what we know about modern paints we have now and apply them to this painting because there have been 70 years of development in paint technology since it was painted. The treatment we’ve been carrying out has been defined by those materials. At the beginning of this it was impossible to understand, it really was a step into the unknown as to what we were going to do.
There have been some challenges, too, which we couldn’t have anticipated from the beginning and which defined the direction we’re taking. It is a slow process. We’ve had to step back and think: ‘OK, what are we going to do with this? Where are we going to take this? What’s possible, given what’s going on with the surface and what’s going on with the way the materials are interacting here?’
And visually there are aspects that are much cleaner now, although that might not be so obvious to people coming to see it.

David:              There are areas in the whites that are quite dramatic. But also there are areas of orange, yellows, there are areas throughout the painting. Another aspect of the treatment that has evolved was when I approached it, I thought I would work across the surface in a grid, but it hasn’t been like that at all. It has been much more to do with working with areas of colour and saying, “OK, we’ll try this area and then we’ll try this area.” And I found that they’re not the same, so we develop a different strategy for the next one. And that has been because the paints are different, they actually behave in a different way. It is quite common in conservation when we’re dealing with these modern materials but, for me, this has been a really fascinating study.

David:  We looked at it with infrared and ultraviolet lights, which were the first steps. And then we took smaller cross-sections of paint and looked at the layers, just to see which layers are present and how they relate to one another. And then we’ve done a bit of pigment analysis to see what pigments we’ve got, what the colours are, how stable they are. Being able to analyse the pigments lets you know which ones are light, fast, which ones maybe sensitive.
And then we’ve also done a little bit of analysis on the paint major TBC itself, just to get an idea of whether the paints are similar across the surface or there are differences in composition. And then we’ve had the cleaning treatment on top of that, which has been informed by that analysis.

Sophie:            When we talked last year, you said you’d found objects such as a staple, a piece of glass and cardboard stuck to the canvas, and also a fingerprint, which we assume is Pollock’s. Have you discovered anything else?

David:              The public always ask that too! People want to see the glass and the staples. And there are always questions about a footprint. I cannot see a footprint in there. I’m not saying it’s not there, just, for the life of me, I can’t see it. So people ask about it and I just have to admit that I honestly don’t know if there is a footprint. I can show the thumbprint and the handprints.

David:              Well, we want to pursue the cleaning to its logical conclusion, wherever that ends. I can’t predict when we’re going to stop because as we deal with things we’re finding things react differently. In general, it’s very stable and there’s not a huge amount to do. So the cleaning is really what I’m looking at as the scope of the treatment and whatever else is at the end is just an extra mountain.

Sophie:            You’ve been looking at Blue poles intimately every other day for 12 months now. How do you feel about the painting now?

David:              I’m still enjoying it. It’s still good fun even though it’s a slow process. Sometimes some areas are really hard going and I’ll spend a whole day on just a centimetre and at the end of the day I think, ‘This whole painting is going to take a long time.’ But then I’ll come back and do a whole section quite quickly. It’s just the nature of the paint changes in the work.

David:              Well, I think now we’ve got so far with cleaning areas, I can see the potential. At the time when we started, it was a complete unknown and I didn’t know what was achievable. And the colours . . . a particular area of white I worked on has really lifted and it really changes how you see it. Because I’m looking down the microscope, a lot of it, for me, is on a microscopic level. So you see changes that you step back from and think, ‘Oh, actually, that doesn’t seem to make much of a difference,’ but then when you add all of those little sections it does make an impact.

I’ve looked at lots of Pollocks in other places previously, but what I’d like to do now, after looking at this one separately, is go back and look at all those others when we are allowed to travel again, and really look at them and think with the knowledge I’ve learnt from working so closely on Blue poles. 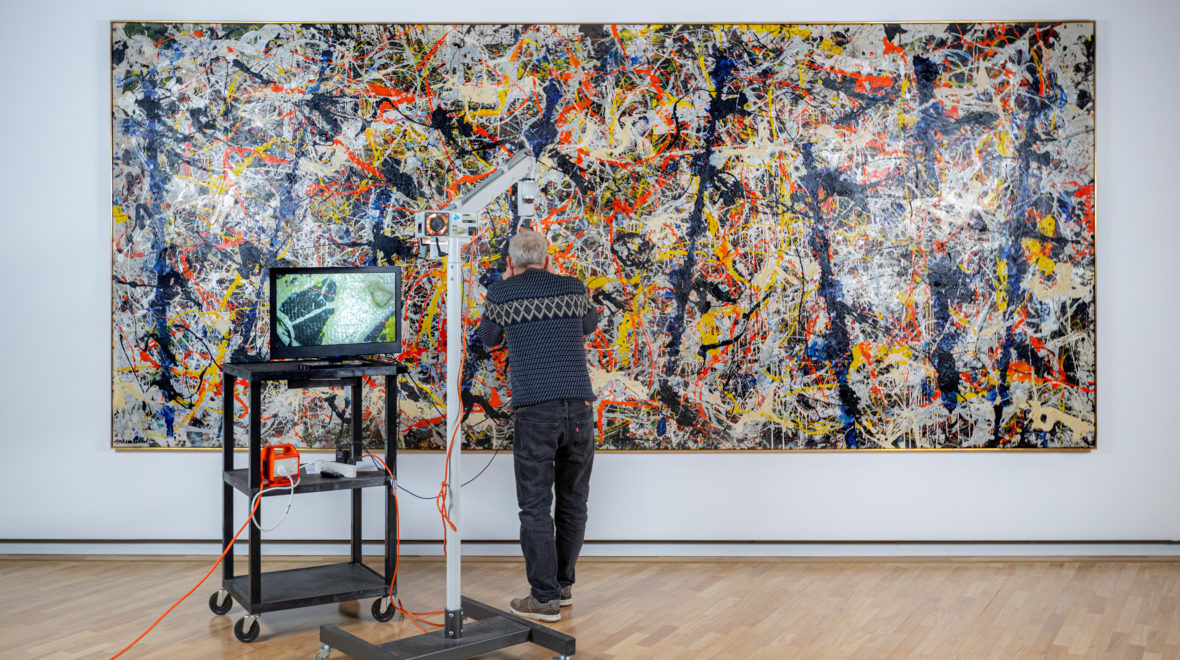